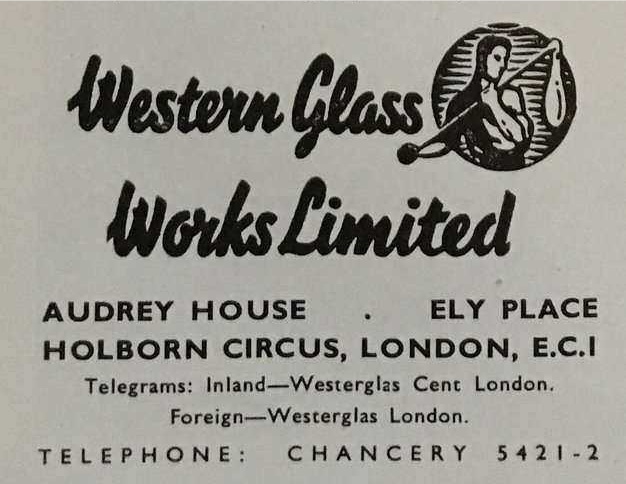 Western Glass Works Limited [Company number 00474735] was incorporated on 7th November 1949. Their advertised address was Audrey House as above, but their glass-works was apparently at 41/43 Dockhead, London SE1, [near Tower Bridge].  It is known they made glass, but later they imported glass, and indeed still do as Western House.  In 1974 they moved from London to Basingstoke, in Hampshire.

The company has changed its name as follows:

On the Glass Message Board Frank Andrews posted, "In 1950 PG, they were listed as manufacturers of Bottles, Pressed Glass, dometsic glassware. Address Audrey House, Ely Place, EC1. Quite possible that was where they had works, lots of small factories around there.  However, they were also agents for W J Child Ltd who had a glassworks producing exactly the same range at Eton Glass Works, Grange Road Leyton, E10.  Heppners (Overseas) Ltd and Heppners (London) Ltd were also in Audrey House. Both companies listed as Wholesale agents."