The Century Glassworks Ltd was at the Angel Factory Colony, Angel Road, Edmonton, London. Dates not known for sure but probably started later than 1920/1 and probably closed sometime after 1967, as there were winding up notices for the company in the London Gazettes dated Nov 1965 and Aug 1967. According to David C Watts (see below for more about his research) the moulds used by Century Glassworks were later sold to the Davidson Glassworks at Gateshead.  The trade advert above states they made glassware in clear flint, pink, blue and green. 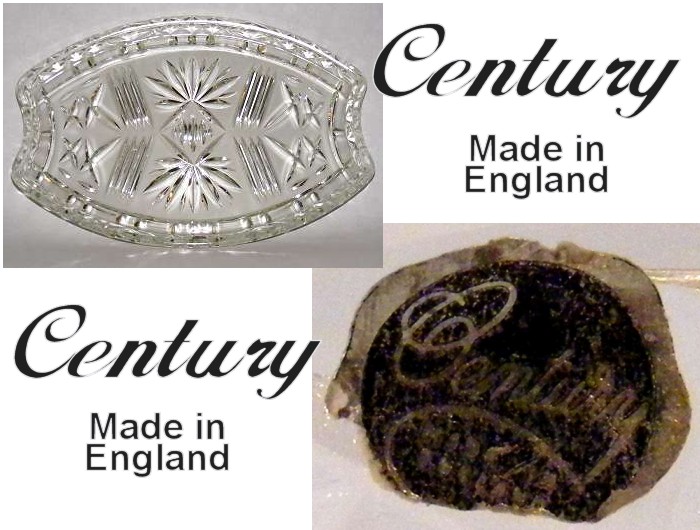 In 1948 their market strategy for export sales was to  attended at the British Industries fair in Earls Court - also attended the Canadian International trade fair Toronto  in June. They were Manufacturers of Glassware: Hand blown,  Pressed Ware, Machine Blown, Bowls, Vases, Jugs, Cruets, Sugars, Creams, in flint and colours.

Their factory was located at the Angel Factory Colony Edmonton Middlesex London. Mr R Winter was chairman of the company. A resolution was passed to put the company in to voluntarily liquidation on the 24th April 1963. It took the liquidator until the 14th of December 1965 to finally close the company.

David wrote, "Incidentally, did you know that Century appears to be associated with the Fountain Glass Works. The connection is explained by the following piece that I have written for my book."

Unexpectedly, the Century Glass Works ledger, page 434, yields another mystery to be solved. This results from an application for a registered design for mould no. 41, described as "Toy set, Coffee set, filed under No. 843996 on 11th August 1945, through G.R. Walsh & Co. Crosby Street, Halifax. Circle print, Sugar basin 8gr. Pr small chest. 8 body moulds, 8 bottoms, 6 plungers, 6 rings." It takes us to our next factory.

The above quotation is not entirely clear but Rd. No. 843996 is allocated not to Century Glass but to the Fountain Glass Works Ltd. The Pottery and Gazette Directory (1956) tells us that it was established in 1940 at Huddersfield Road, Roberttown, Liversedge, Yorks, with London offices for Domestic glass, at the Fountain Glass Works Ltd., Angel Factory Colony, Edmonton, N18. A third premises for Containers, is given as H.A. Connell, 195 Goldhawk Road, Shepherds Bush W.12. The firm, overall, is listed with three oil-fired tank furnaces to make bottles, jars; machine and hand-pressed domestic glassware, under the Trade Name, Viking. London show-rooms were at 159a Regent Street, London, W1.

Now comes the real surprise for the directors, R. Winter and F.F. Richards, are the same as those for Century Glass but with the addition of H. Rudolf and Mrs. R.L. Richards as Chairman. Overall, this evidence suggests that the Century Glass Works was a subsidiary of the Fountain Glass Works, expanding its output particularly for the London market and for export.

Thanks to Max Kimber for her informative posting on the Glass Message Board about this previously unknown glassworks, and to Nicholas Dolan* on whose research published in Glass Circle News Max's piece was based. Also many thanks to Thomas Joyce of the Inchicore Pressed Glass Works Private Museum in Ireland whose work in researching this company and sharing his findings are very much appreciated. Finally a huge thank you to David C Watts, whose ongoing research into this area is adding more snippets to what we know about Century Glass. David's site is  http://www.glassmaking-in-london.co.uk/ and his updated book on Glassmaking in London will be published shortly. *Nicholas Dolan, Author of article 'Century Glass', pages 16/17, No.103, Glass Circle News.