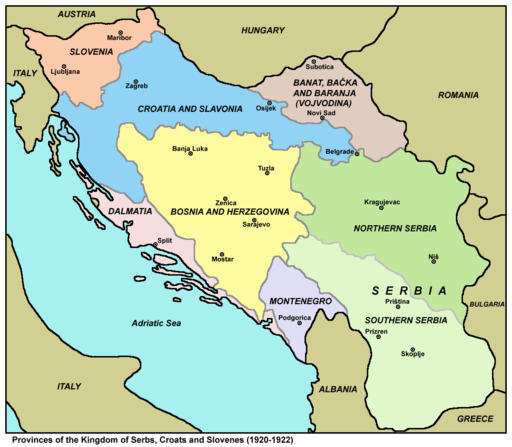 The Kingdom of Yugoslavia was a state in Southeast and Central Europe that existed from 1918 until 1941, during the interwar period and beginning of World War II. From 1918 to 1929, it was officially called the Kingdom of Serbs, Croats and Slovenes but the term "Yugoslavia" (literally "Land of Southern Slavs") was its colloquial name due to its origins. The official name of the state was changed to "Kingdom of Yugoslavia" by King Alexander I on 3 October 1929. The Kingdom of Serbs, Croats and Slovenes was formed in 1918 by the merger of the provisional State of Slovenes, Croats and Serbs (itself formed from territories of the former Austro-Hungarian Empire, encompassing Bosnia and Herzegovina and most of Croatia and Slovenia) with the formerly independent Kingdom of Serbia. The Kingdom of Montenegro had united with Serbia five days previously, whereas the regions of Kosovo, Vojvodina, and Vardar Macedonia had become parts of Serbia prior to the unification. This fluidity of states makes pinning down glassworks geographically complex, so for ease of use, all glassworks within this area will be listed under the Yugoslavian category.