The Chippendale range originated in 1907 with the Ohio Flint Glass Co., but was sold in 1908 to the Jefferson Glass Co. of Ohio, when Ohio Flint Glass Co. was in financial difficulties. In 1919 Central Glass Works of Wheeling, W.Va., obtained the rights to manufacture the pieces, which it did for at least 10 years. Sometime between 1929-1933 the moulds were sold to Central's UK importer, Charles Pratt, and all subsequent Chippendale glass was made by Geo. Davidson's Teams Glass Works at Gateshead. Davidson's subsequently purchased the moulds from Pratt. See also English > Davidson > Chippendale for details of the patterns made in England.

Clear, Moonstone where noted alongside item,

Fred Cooper for photos and information

Neither the Loomis book nor the CGW reprint catalogue show complete American-made trinket sets; instead, individual items were made which could, and were, grouped together as sets by retailers or by the customer herself. Some of the items were catalogues as having multiple uses, e.g. T1170 is given as a Cold Cream Jar or a Horse Radish Jar, whilst T1175 is given as a Puff Jar or a Pickle Jar. Such flexibility was, no doubt, a huge aid to marketing! 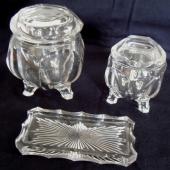 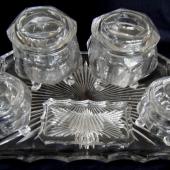 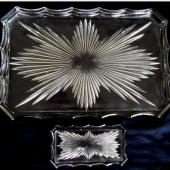 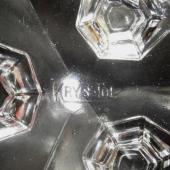